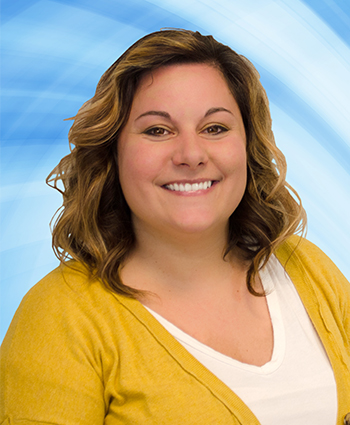 Master Ensuite. The construction and materials originally used when this home was built were poor quality which eventually lead to a leaking shower drain line clogged with thinset/mortar from the tile floor installation. Their main concern was fixing this problem so that it wouldn’t occur again along with waterproofing the rest of the space for cleanability. General aesthetic upgrade as well. Some aging in place was also considered here because they do plan on living here for a while. 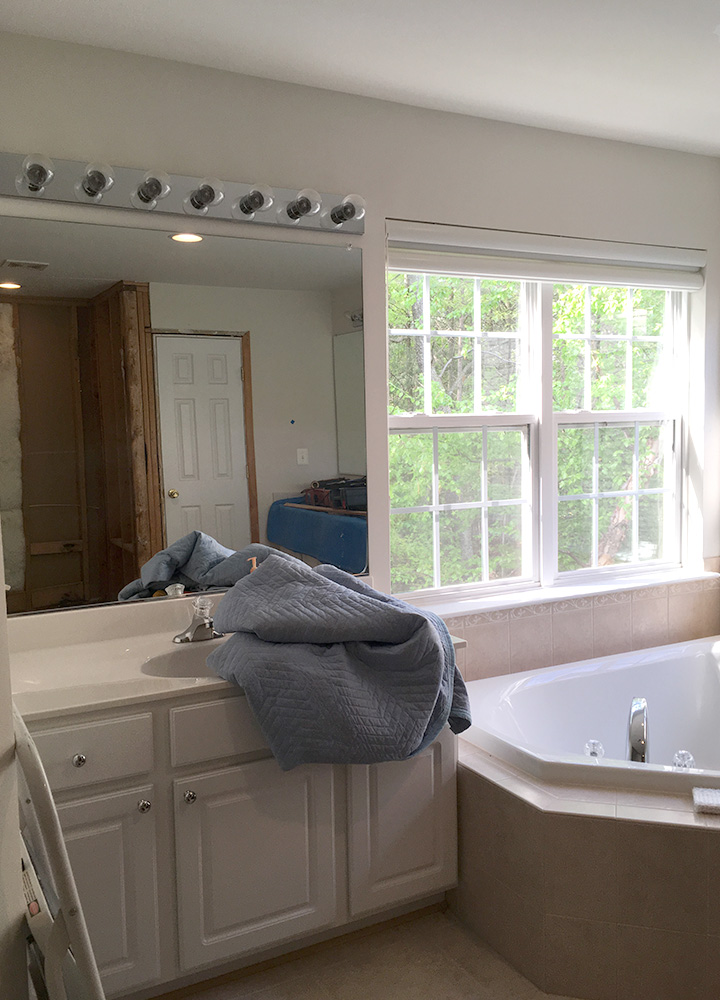 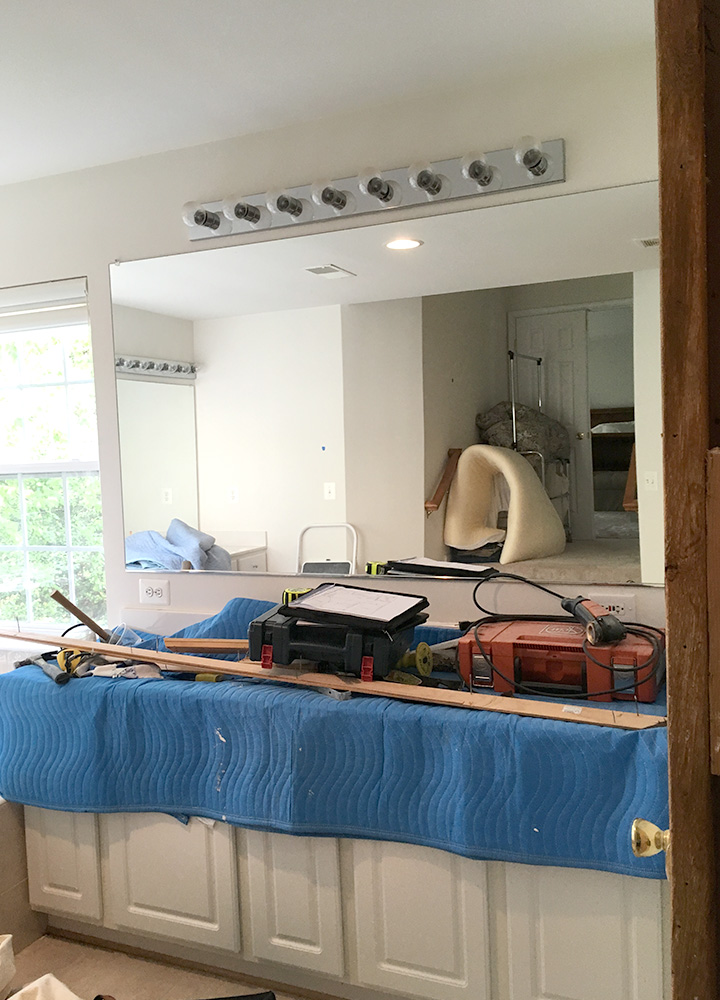 Waterproofing this bathroom was of main concern. They know that they wanted to waterproof the floors for better cleanability. We also discussed waterproofing window sills and mirror ledges to keep water from pooling in these areas as well. To resolve the waterproofing floor concern, I proposed the DitraXL waterproofing floor membrane along with wainscot tile on the walls that also had waterproofing membrane behind it. We did stand-off mirrors with only ¾” backsplash at the vanities so that any moisture from a hot shower would run-off onto the countertop as opposed the drywall where it could create mold issues. For the windows sills, we removed existing wood sills and replaced these with ¾” solid surface material to make these easier to wipe down. We also installed a mop spout in the shower area to be able to fill up a bucket for cleaning as well.

One of the walls was constructed unevenly, so we removed and rebuilt it. We had to clean out the shower drain assembly from the previous contractors work to allow for proper drainage.

The shower and sinks remained in the same locations, but we construct the new vanities to be wall-mounted for easy cleanability underneath, which also allowed for a tile substrate as opposed a wood vanity toe kick. Because we did wall-mounted vanities, we featured this with under cabinet lighting that the homeowner now uses as a night light. We also did lighting on the stairs. We upgraded the shower to have fixed head, rain head, handheld shower, and mop spout for more multifunctional use. We also added grab bar and wall-mounted seat for some aging in place options. We did go back and forth between covering the sides of the vanity with solid surface material (where it meets the tub deck) versus leaving the natural walnut wood sides exposed. Aesthetics won this battle! 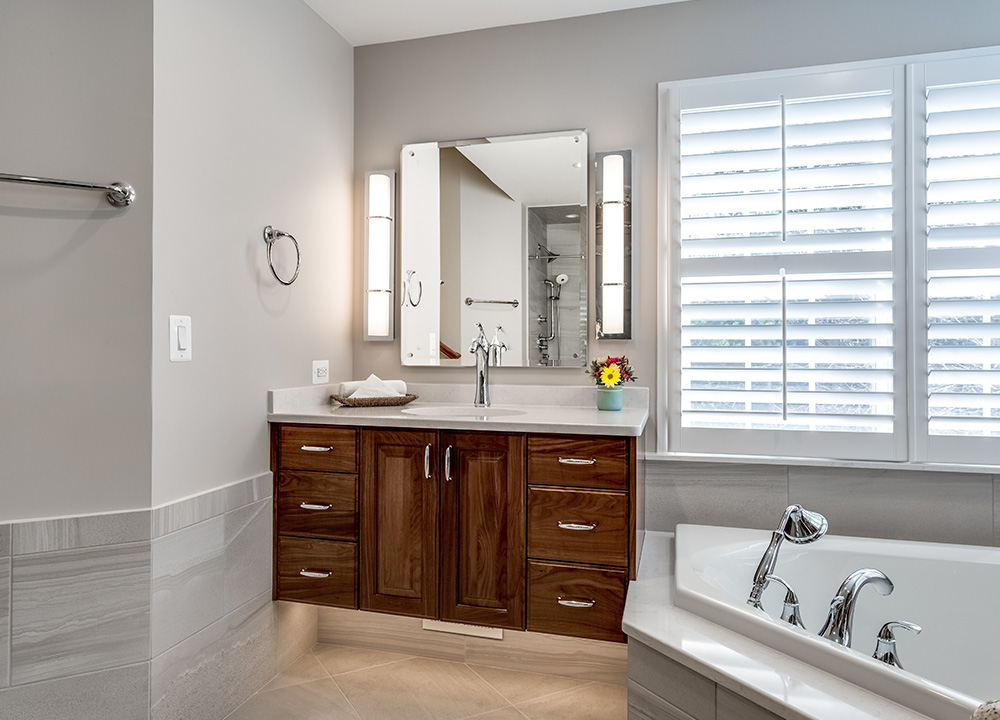 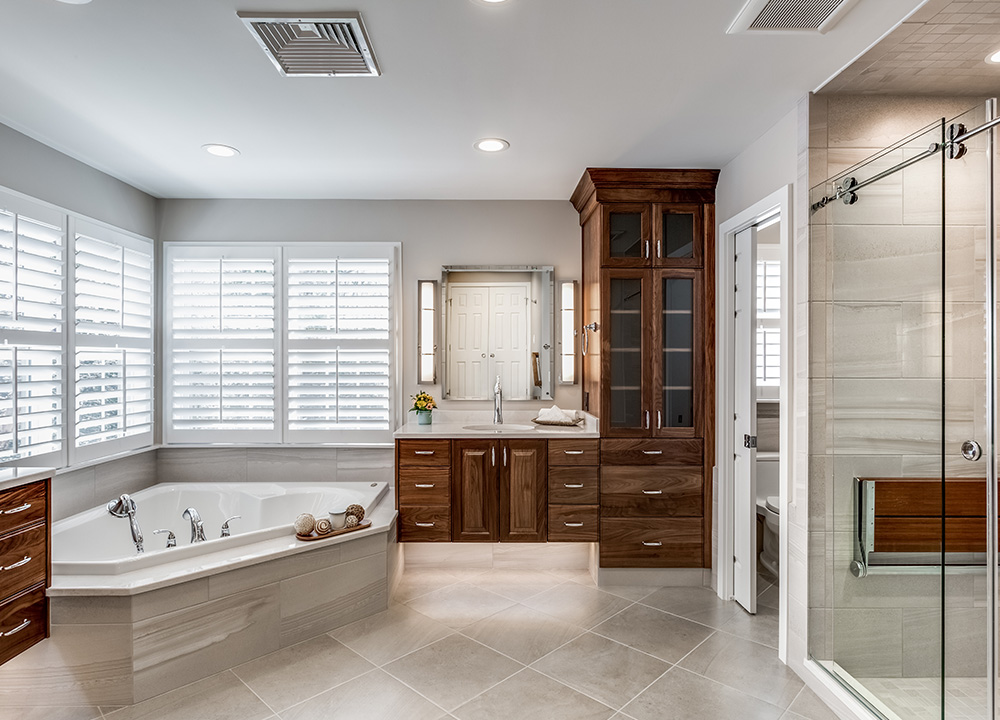 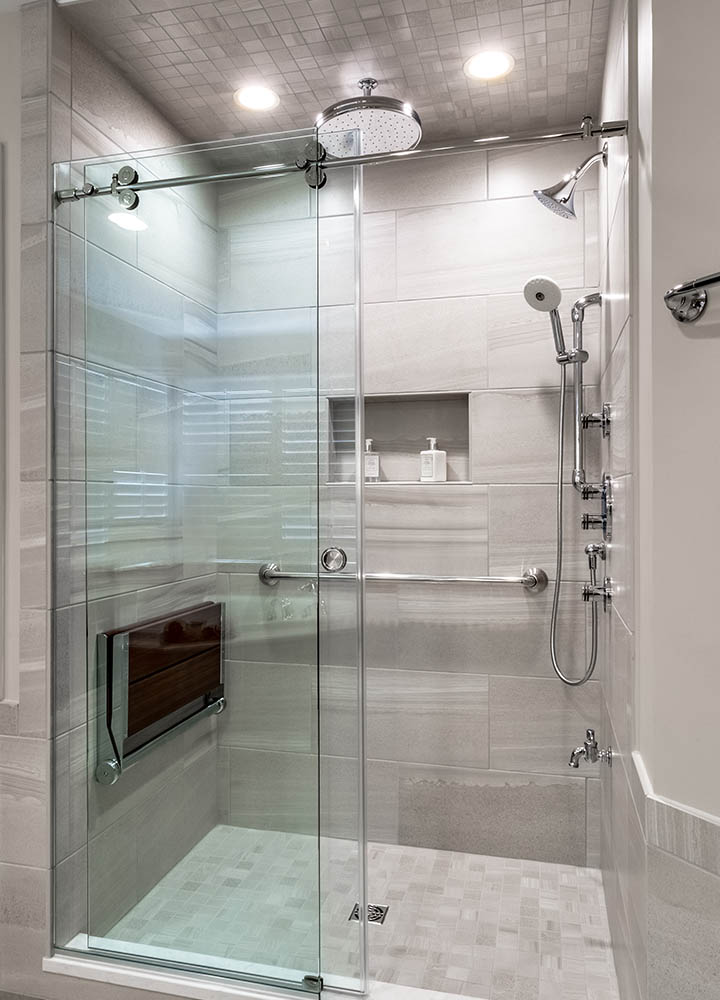 Everything came together very well. Because of the shear amount of tile that was installed we went with more subtle tones to not make the space feel too busy. We were completed early and on budget. The customer came to love how all the materials came to work together so naturally. My favorite being the natural walnut wood cabinetry.

Let Kayla help with your next remodeling project.

At Foster Remodeling Solutions Inc., we’ve been remodeling homes in Northern Virginia for 35 years. We specialize in kitchen remodeling, bathroom remodeling, home additions and more! Our longevity in this industry is a direct result of our process and practices to ensure customer satisfaction. Remodeling is a collaborative experience and we’ve been building relationships with our clients that last. Contact a member of our award-winning team to discuss your options and get started!

The High Cost Of Hiring A Low Cost Remodeling Contractor.
Scroll to top